This circuit also detects when there is an open circuit because the display has all the segments turned off indicating that the test point is disconnected.

The logic probe is designed with TTL technology and only serves to diagnose circuits of the same technology.

How does the logic probe with 7 segment display work?

If we connect the 7447 decoder in the common way to the 7 segments display, we can see that it does not display the expected letters (H or L). This is because the connections from the output of the integrated circuit to the inputs of the display must be wired in a special way to obtain the letter “H” for the high logic level and the letter “L” for the low logic level.

The logic probe with 7 Segment display input consists of two exclusive OR logic gates (IC2b and IC2a) and operates as follows:

– When there is an open circuit in the probe, the inputs of the gate IC2b are not grounded but ‘float’ just below the minimum level of logic state ‘1’. Then the output is a “1”.

When an open circuit is detected, the measured signal reaches one of the IC2a gate inputs, but successive voltage drops across the diodes D1 and D2 cause this voltage signal to decrease, thereby preventing the input to the gate. Gate IC2a switch to “high” and keeping the input “low” through R1. The other input is kept at “1” so that the output equals a logical “1”.

The connections of the encoder 7447 outputs to the 7 segment display inputs are shown in the above diagram. The symbol and truth table of the exclusive OR gate (or exclusive) is shown below. 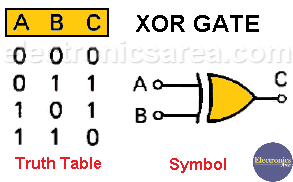 This article is based on the Hi Low logic tester article from Elektor Magazine.