This very simple logic probe using NOT Gates (inverter gates) is  made with three NOT gates, one rectifier diode, two LEDs and two resistors.

The logic probe allows us to know the logical state of any point in a digital circuit. The signal to be measured is applied to the “Probe Tip” input.

How the logic probe works? 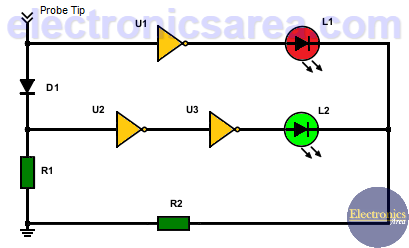 The R2 resistor limits the current flowing through both LED (green and red). To implement the circuit, a TTL SN7404 integrated circuit (6 NOT gates in a single IC) is needed.