This blown fuse indicator circuit warns us, by lighting an LED, when there is a problem in an electrical installation protected by the fuse.

It is very important to correct faults in the electrical system of a car or motorcycle or another, as soon as possible.

If you don’t know that a fuse is blown, you may run into trouble when the problem is harder to solve. For example at night or far from a mechanical workshop.

The circuit shown in the diagram is made up of few elements. The most important is a PNP bipolar transistor, which functions as a switch. 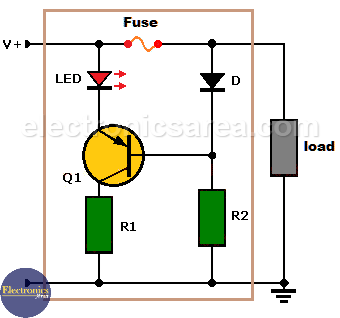 – If V + is present and the fuse is good, the transistor will be in the cutoff region and will not conduct. (see that the voltage at the base of the transistor is V + – 0.7 volts) and consequently the LED does not light up.

– When the fuse blows, no current flows through it and the voltage level at the base of the transistor drops to zero volts. The transistor enters the saturation region (there is an electric current flowing through the emitter and collector), the LED lights up, warning that there is a problem. 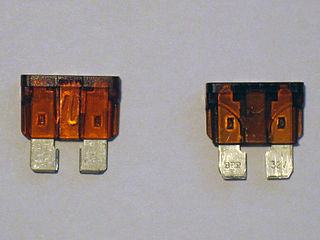 There are many fuses in a car’s electrical system. To have a general control of all fuses, you can put this circuit in parallel with each fuse. This circuit can also be used in toys, car radios, and almost any DC or battery circuit.