OR and AND logic gates made with diodes

If one or both inputs are at logic “1” (5 volts), the current will flow through one or both diodes. This current passes through the resistor and causes the appearance of a voltage across its terminals, thereby obtaining logic “1” on the output. 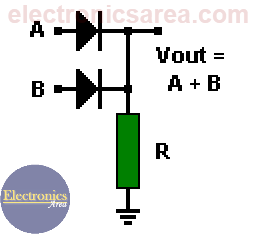 We only get logic “0” (0 volts) on the output when both inputs are in logic “0”. In this case, the diodes do not conduct, there is no current through the resistor R and there is no voltage across its terminals. As a result the voltage at Vout is the same as ground (0 volts) 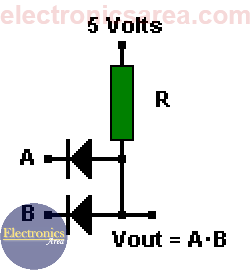 When both inputs are at logic “1″, the two diodes are reverse biased and there is no current flowing to ground. Therefore the output is logic “1” because there is no voltage drop across the resistor R.

If one of the inputs is logic “0”, the current will flow through the corresponding diode and through the resistor. Thus the diode anode (the output) will be logic “0”.

This method works fine when the circuits are simple, but there are problems when you have to make interconnections with such gates.

Interconnecting OR and AND gates

We make a connection of 2 AND gates and 1 OR , as shown on the picture. 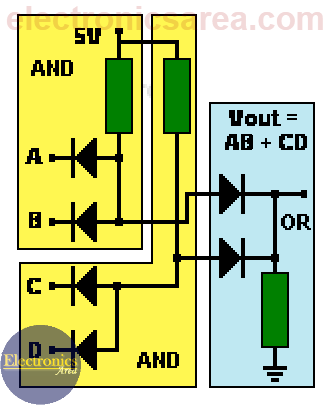 These outputs serve as inputs for the OR gate.

Analyzing the output of the OR gate and assuming that the values of the resistors are the same throughout the circuit, a voltage division has been created, then the output voltage will be approximately: Vout = (+V -Vd)/2.

By replacing V and Vd with real values on the last formula we get: Vout = (5-0.7)/2 = 2.15 Volts. (We divide it by 2 because there are two resistors of equal value on the electric current flow)

In the case in which all inputs (A, B, C, D) are on logical “1”, the two resistors of the AND gates would be in parallel, and they would be in series with the OR gate resistor. This would provide an output voltage of 2.85 Volts. This level is in the not allowed (prohibited) area for a logical “1”.

If we put more gates in cascade the problem will be more serious, so this method is only used for simple gates.

6 Responses to “OR and AND logic gates made with diodes”