What is a JK Flip-Flop?

The JK Flip-Flop is a sequential device with 3 inputs (J, K, CLK (clock signal)) and 2 outputs (Q and Q’). J and K are control inputs. These control inputs are named “J” and “K” in honor of their inventor Jack Kilby.

JK Flip-Flop is called as a universal Flip-Flop or a programmable flip-flop because using its J and K inputs, the other Flip-Flops can be implemented.

The PRESET and CLEAR inputs of a JK Flip-Flop

There are two very important additional inputs in the JK Flip-Flop. 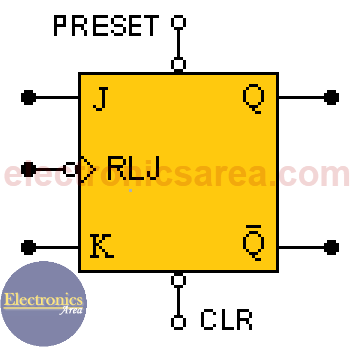 The PRESET and CLEAR inputs of the JK Flip-Flop are asynchronous, which means that they will have an immediate effect on the Q and Q’ outputs regardless of the state of the clock and / or the J and K inputs.

It is important NOT to simultaneously activate the CLEAR and PRESET inputs.

The Flip-Flop may or may not have a small bubble in the PRESET or CLEAR inputs which indicate that they are active low. The complete diagram of the JK flip-flop is as shown in the diagram above.

From the previous truth table it can be seen that the CLEAR (CLR) and PRESET inputs are active at a low logic level  and put on the Q output of the Flip-Flop, a high logic level regardless of the state of the clock and / or the state of the J and K inputs. (see the J, K and clock inputs with an “X”).

In order for the J and K inputs and the clock to be functional, the CLEAR and PRESET inputs must be at a “High” logic level (not active), then: