This simple 6 LED VU meter using one transistor, allows us to visualize the level of an audio signal. Due to its few components, it is a cheap circuit and easy to build. The components are very common and very easy to obtain.

The interesting thing about this circuit is that it uses a single transistor as an active component and its operation affects the behavior of the entire circuit.

The progression of the illumination of the LEDs is linear, it is not logarithmic.

How does the 6 LED VU meter using a transistor works?

The audio signal is applied directly to diode D6. Diode D6 rectifies the incoming audio signal which is then delivered to the capacitor C1. C1 flattens the signal obtaining in its terminals a DC voltage proportional to the audio signal.

The R1, C2 set helps to eliminate the small voltage variations that may exist before applying the signal to the base of the bipolar transistor Q1.

The diodes D1 to D5 create a voltage difference between each LED of approximately 0.6 volts. Thus, a LED will light up after the 0.6 volt increase to the whole set of LEDs. The transistor Q1 works in its active zone and …. 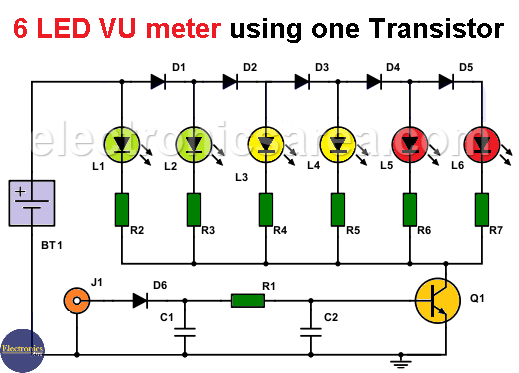 Note: To make this vu meter more sensitive and activate with weaker audio signals, you can change the 1N4148 silicon diode (D6) 1N4148  with the germanium diode 1N60.

If you make this modification, change the R1 resistor value to 2.2K and eliminate capacitor C1.