You can buy a Soldering Iron temperature controller system with many features, but here we want to give a circuit for you to do it yourself.

A soldering iron is an instrument used to repair and assemble electronic circuits. This instrument works, most of the time, connected to the outlet (110/220 VAC). This causes a constant energy consumption. 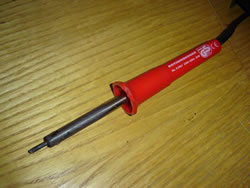 The circuit shown can vary the temperature of the soldering iron from 0° degrees to its maximum value, thus regulating the heat dissipation.

The set of components: potentiometer R1, resistor R2 and the capacitor C1, vary the trigger angle and thus the time the TRIAC go into conduction. The DIAC can trigger the TRIAC in both directions (both positive and negative half cycle of the voltage wave). Handling the potentiometer R1, we vary the temperature of the soldering iron.

This circuit can be put in a small metal box. Place the pot so that it can be easily handled from the outside. (As a volume control)

List of components for the soldering iron temperature controller