Before analyzing operational amplifier as comparator, let’s see what a comparator is. Comparators are non-linear circuits that, as the name implies, serve to compare two signals (one of which is usually a reference voltage) and determine which of them is greater or lesser.

The output voltage has two states (binary) and works as a 1-bit analog-digital converter. Its use is very important in the applications of signal generation, detection, signal modulation, etc., and constitutes a basic analog block in many circuits. The function of the comparator is to compare two voltages, resulting in a high (VOH) or low (VOL) voltage.

The second image below shows the symbol to represent comparators that is the same as that used for operational amplifiers. This operation of a comparator, represented in the VTC of the figure can be expressed as:

In case the voltage Vn is set to 0, then the output voltage V0 = VOL or V0 = VOH depending on whether Vpp > 0, respectively. The comparator accepts analog signals at the input and provides binary signals at the output. This element constitutes a link between the analog and digital world. 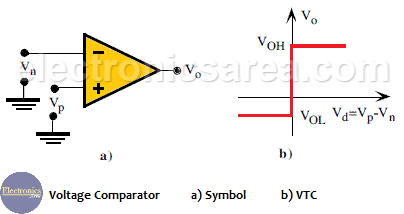 Op-Amp as a comparator

Operational amplifiers can function as comparators when the differential gain in open loop is high (> 10,000) and the speed is not a critical factor. As an example, the 741 op-amp works as a linear input element if the differential mode input voltage is between the values ​​–65µV < Vd < +65µV.

Outside that range the amplifier output stage goes into saturation and can work as a comparator.

Image below shows a simple application of the 741 Op Amp as a comparator. The amplifier lacks feedback and the VTC in the image indicates that whenever Vi> VT, then the output is low, and vice versa, if ViT the output is high.

The limits, high and low Vo, are set by the supply voltages; in this case ± 15V. This image shows an example of the operation of this circuit to an analog input Vi.

Although Operational Amplifiers can functionally act as comparators, their limitations make them unusable for many applications. They have an important frequency limitation, a low slew-rate and delays so high that they are only valid at low frequencies.

In addition, Operational Amplifiers are designed to act as amplifiers and include frequency compensation techniques not necessary when operating as comparators. Sometimes it is necessary to add additional circuitry when the voltage levels have to be compatible with TTL, ECL or CMOS.

Due to these limitations, monolithic comparators have been developed specially designed for comparison applications.