In a non-inverting operational amplifier (non-inverting amplifier), the signal to be amplified is applied to the non-inverting (+) pin of the integrated circuit. As the name implies, the output signal is not inverted with respect to the input.

The image shows that the voltage at R1 is equal to: VR1 = [R1/(R1 + R2)] x Vout. (voltage divider). In normal operation, the voltage between the inputs (inverter and non-inverter) is practically the same, which means that the Vin input is equal to VR1.

From the above formula it follows that the voltage gain in this type of amplifier will be 1 or greater. 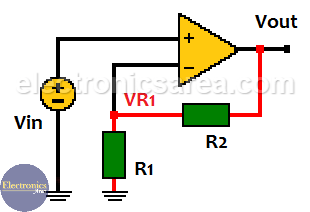 The input impedance of the non-inverting operational amplifier is much greater than that of the inverting amplifier. This value can be obtained experimentally by placing a resistance R of known value at the non-inverting input. Look at the following image. 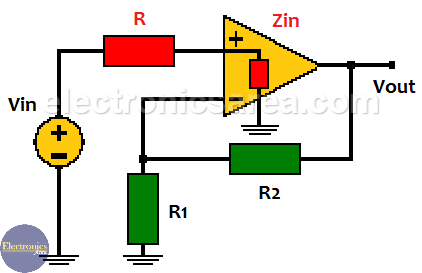 At the terminals of the resistor R there is a voltage drop due to the current flow that comes out of the signal source and enters the operational amplifier.

This current is obtained using ohm’s law: I = VR / R, where VR = Vin – V+. The following formula is used to obtain the input impedance: Zin = V+/I. Where: