What is an Inverting Summing Amplifier using Op Amp?

The inverting summing amplifier with op amp has an output voltage equal to the sum of the voltages it has at its inputs. The following explanation is based on an adder of three inputs, but applies to an adder of any number of inputs.

Each of the inputs has a resistor (R1, R2, R3), called input resistor which, combined with the feedback resistor (Rf = R4), form an inverting summing amplifier with a gain obtained using the formula:

This formula applies to all inputs. 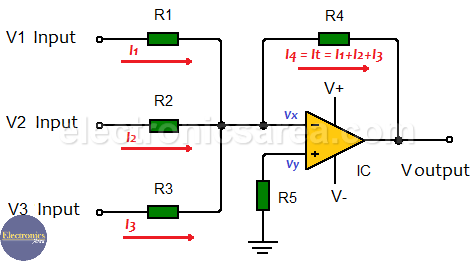 From the above diagram it can be seen that input currents are:

Using the above formulas we find that the output voltage is: 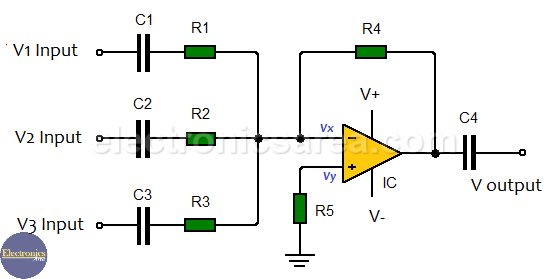 The function of the coupling capacitors in the summing amplifier in alternating current is to block the DC component of the input and output signals, allowing only the alternating component to pass.

You may also like: Op Amp Voltage follower (buffer)