To complement the visual warning of a high temperature, a buzzer is included in the circuit. The buzzer will sound to alert if there is an emergency. The temperature gauge circuit is implemented using four comparators. We use the LM324 integrated circuit having four 741 operational amplifiers (Op Amp) in a single package. 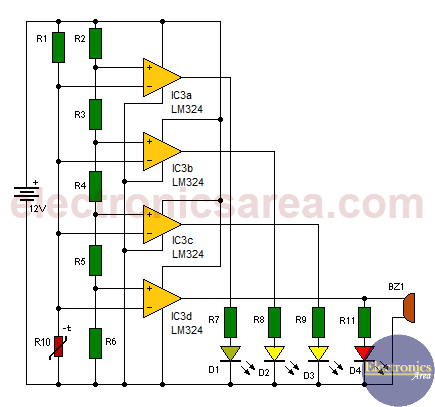 The temperature gauge circuit diagram shows a voltage divider network made with R2, R3, R4, R5 and R6 resistors. Voltages obtained are 2.4V, 4.8V, 7.2V, 9.6V. Each of these voltages is connected directly to the non-inverting pin (+) of the operational amplifiers used as comparators. 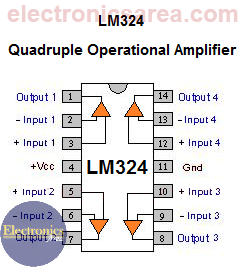 The higher the temperature, the lower the thermistor voltage will be and more LEDs will light. When the temperature is too high, the lower comparator turns on the red LED and activates the buzzer, which gives the audio alert that is very important.

Printed circuit board for the temperature gauge circuit

The second diagram shows the set of tracks (on both sides of the printed circuit board) and the
distribution of the components. This diagram is not to scale.

The next two diagrams show the tracks on the copper and the component side of the circuit board. These are suggested diagrams.