What is a Truth Table?

Truth table is a table of inputs and outputs, used in digital electronics. You usually start with a table of the outputs you want from the given inputs and design the circuit. This table is used to simplify boolean equations obtained from digital circuits.

It can have many columns, but all tables operate in the same way. There is always at least one output column (on the right side) that represents the result of all possible combinations of the inputs.

For Example: In the following truth table there are 3 input columns, then we will have 23= 8 combinations (8 rows). A three input switches circuit (with 2 possible binary states: binary “0” or “1”), has 8 possible combinations. The output (exit column) is determined by the state of the input switches.

Logic circuits are basically an array of switches known as “logic gates” (AND gate, NAND, OR, NOR, NOT, etc.). Each of this logic gates has its truth table.

If we could see in more detail the construction of these “logic gates”, we would realize that they are built with transistors, resistors, diodes, etc. and they are connected in a way that we obtain specific outputs for specific inputs.

The widespread use of logic gates simplifies the design and the analysis of complex circuits. Modern technology allows the construction of integrated circuits (IC’s) that are composed of thousands (or millions) of logic gates.

Example of a 2 & 3 Input NOR gate Truths Tables 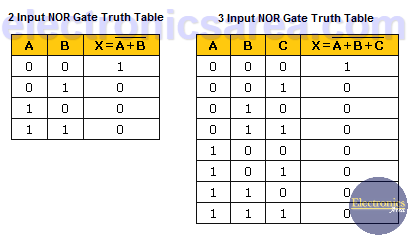