Impedance (Z) shows the opposition to the flow of direct or alternating current. Impedance is the vectorial addition of resistance and reactance.

The Impedance unit is Ohm, and it is equal to the phasorial addition of a resistive value (resistance) and a reactive value due to a reactive components (inductors and capacitors): Z = R + jX 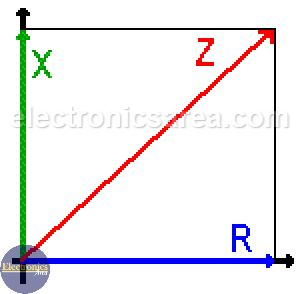 The “j” operator that goes before the X capital letter, tells us that X is an imaginary number. This is not a common addition, It is a phasorial addition (sum of phasors).

The inductor and capacitor cause an opposition to the flow of the alternating current (plus a phase difference), but they do not ideally cause any dissipation of power, as in the resistor (Joule’s Law).

This phase shift, on inductor and capacitor, is opposites, and if they have the same magnitude they would be cancelled and the total impedance of the circuit would be equal to the value of resistor. (see the formula above).

The formula Z = R + jX is represented by the picture above. You can see that:

Example of impedance calculation in an RLC series circuit

Note: The parentheses to 1/2 power is equal to a square root.