Why is a transformer core-laminated?

You all know that the transformer is core-laminated and someone will have wondered if it would not be easier to use a compact iron block.

If you are looking for an explanation for this purpose, you will not find it easily, so we will try to illustrate as simply as possible the reason why it is not possible to use a solid iron core instead of core-laminated.

By inserting a solid iron core into the transformer, when it is subjected to an alternating magnetic field, parasitic currents run inside it (eddy currents) that heat it up.

In reality the same situation occurs as if we wrapped a large loop around the transformer core and short-circuited the two ends together.

To neutralize these eddy currents, it is necessary to section the core into very thin sheets, isolating them from others, by means of a layer of varnish or oxide, in such a way that even if one exceeds the other, the eddy currents in a sheet could never be short-circuited with the currents of the adjacent sheets. 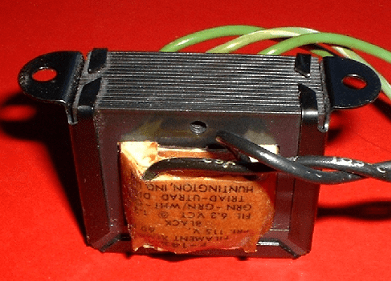 The standard sheets currently on the market are 0.50 mm thick and only the “special” type is 0.35 mm thick.

Obviously, those with a thickness of 0.35 mm have higher performance because the losses caused by scattering and by eddy currents are lower

Laminating of core – The Core-laminated Transformer

We must point out that eddy currents and hysteresis losses increase considerably with increasing working frequency, then the laminated-cores can only be used in low frequency up to a maximum of 20,000 to 30,000 Hz.

To work at frequencies between 10,000 – 100,000 Hz, it is convenient to use ferrite cores composed of microscopic iron grains joined by special glues that isolate them from each other.

The lighter the core, the less iron powder is in its body, so the higher its working frequency will be.

The very heavy ferrite cores are capable of working up to a maximum frequency of 2Mhz, the lightest ones up to 20/50 MHz and the very light ones even at frequencies above 100MHz.