What is Half Wave Rectifier?

The half-wave rectifier is mainly used in low power applications due to two main disadvantages:

1. The output amplitude is less than the input amplitude.
2. Because there is no output during the negative half cycle, the output is a pulsed DC voltage with excessive ripple.

To make the rectification process, we use a rectifier circuit made of semiconductor diodes. An electric transformer is used to reduce the line voltage from 110 / 220 volts AC or other, to a lower voltage such as 24, 12, 15  or 9 volts AC.

The rectifier circuit is placed at the output of the transformer. The voltage at the transformer secondary winding is alternating, and it has positive and negative half cycles.

During each “positive” half cycle of the sine wave, the diode is forward biased, allowing current to flow through it. If the diode is considered ideal, it is like a short circuit. Then all the transformer voltage  secondary winding goes directly to the load resistor. 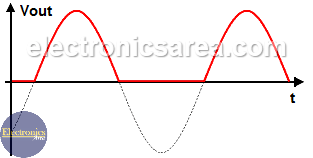