What is Joule’s Law? The Joule effect

It is known as Joule effect to the phenomenon by which if in a wire circulates an electrical current, part of the energy is transformed into heat. The Joule’s Law is named after the British physicist James Prescott Joule.

Joule’s law shows the relationship that exists among

Joule’s law can be established as the amount of heat (Q) generated in a wire with resistance (R), when a current (I) passes through it for a period of time (t).

This heat is directly proportional to: 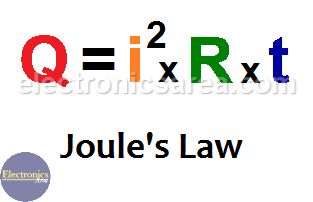 What are the heating effects caused by electric current?

When a current flows in a wire, thermal energy is generated in it. The heating effects caused by electric current depend on three factors:

Some applications of Joule’s law

Example 1: How much heat does a 2 amp current generate in a wire with a 50 ohm resistor for 2 seconds?

Example 2: The resistance of an electric bulb is 100 ohms. When 120V is applied across its ends, find the power consumed in 1 hour.