The capacitor is manufactured in many shapes and materials, but no matter how it has been constructed, it is always a device with two plates separated by an insulating material. If a battery is connected to a capacitor, it will allows no direct current (DC) to flow through.

If a not charged capacitor is connected across the terminals of a battery, a transient current flows as the capacitor plates charge up.

Current flows from the battery terminals to the capacitor plates.

The current that is discussed in the preceding paragraphs is a current that varies over time, the current starts from a maximum value and decreases to 0 amps, when there is no current flowing. This happens in a very short period of time and is called “transient current”. 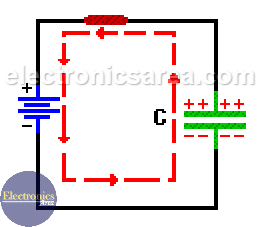 The amount of charge a capacitor can store, is called “capacitance”. The capacitance value depends on the physical characteristics of the capacitor. 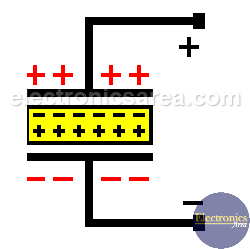 The dielectric aims to increase the capacitance value of the capacitor. When a dielectric is used, it acquires a charge opposite to the charge on the plates, reducing the net charge of the device, allowing the arrival of more charge to the plates. 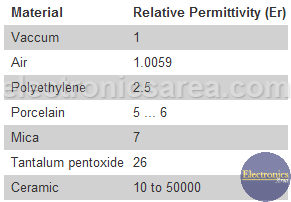 The higher the permittivity, the higher the capacity the dielectric allows to obtain. Capacity is calculated using the formula: C = (Er x A)/d, where:

The unit of measurement of the capacitor is the Farad, but this unit is big and is more common use:

Look at: Definition of common units.

The main electrical characteristics of a capacitor are its capacity and maximum voltage between plates. There are two types of capacitors: