Photodiode looks similar to the common LED, but it has a feature that makes it very special. It is a device that converts light into electric current.

This current flows on the opposite direction of the arrow of the diode and is called leakage current.

It can be forward biased (the current flows on the direction of the arrow of the diode). In this case, the light on the photodiode has no effect on this component and it works like a common diode.

Most photodiodes are equipped with a lens. This lens focuses the incident light so the reaction to light exposure is better. Unlike the LDR or photoresistor, it responds to the changes from darkness to light and vice versa much quicker, and it can be used with circuits with shorter response time. 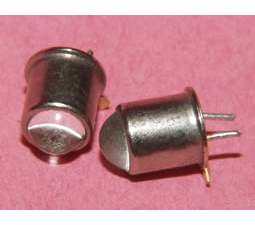 When we place a photodiode between the collector and the base of the bipolar transistor (with the cathode of the diode pointing to the collector of the transistor), we have the equivalent circuit of the phototransistor.