For example: What is the power dissipated in a resistor if the current I is 0.25 amperes and the voltage V is 3 volts.

Using the #2 formula we can get electric power without the current value and, using the #3 formula the power is obtained without the voltage value. These formulas are useful for finding the power in a resistor, where the energy is converted into heat. 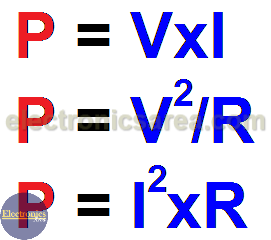 Normally the power converted into heat, is considered lost power or useless power. The main idea is that the power supplied is make the most, and that the power lost in heat and others is minimal. To find out how well the power is used, we use the term “Performance”.

The unit of electrical power is watt. Multiples and submultiples of watt are: