The Ohm’s Law formulas are: V = IR, I = V/R, and R= V/I.  It can be easily understood if we analyze a circuit where there is a battery (12 volts source of voltage) in series with a 6 ohms resistor.

Therefore, the electric current flowing through the circuit (through the resistor) is: I = 12 Volts / 6 ohms = 2 Amperes.

In the same way, we can solve the equation above for the voltage, and we get V = I x R (another expression for the Ohm’s law) so if we know the current and the resistor’s value, we can obtain the voltage between the terminals of the resistor, as follows: V = 2 Amperes x 6 ohms = 12 Volts. 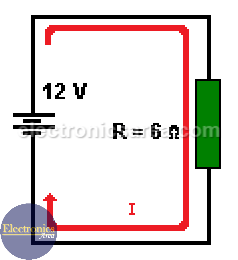 As in the previous case, we can solve the equation for the resistance, and we get R = V / I. Then if we know the voltage in the resistor and the electric current passing through it, the resistor value is: R = 12 Volts / 2 Amps = 6 ohms

It is interesting to see that the relation between the electric current and the voltage in a resistor is always linear and the slope of this line is directly related to the value of the resistor. Thus, the bigger is the resistor value, the greater the slope will be.

The following triangle which is very similar to the formulas discussed above is used to remember the three expressions of the Ohm’s Law. 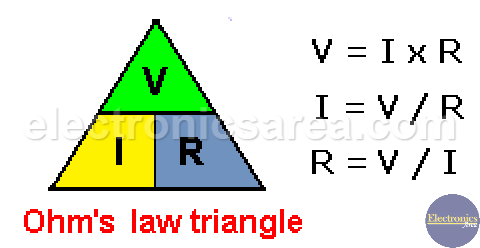 Looking at the picture we can see three lines with different slopes that correspond to three different resistors values.