Magnetic field created by a current in a wire.

When an alternating current or direct current flows through a wire, a non-visible effect called the electromagnetic field is generated around it. This field forms circles around the cable as shown in the figure. There are circles near and far from the wire simultaneously.

The magnetic field is more intense the closer it is to the wire and this intensity decreases as it moves away from it until its effect is zero.

The magnetic flux direction can be found if the direction of the current in the conductor wire is known and the Second Right-Hand Rule is used. (see the figure). 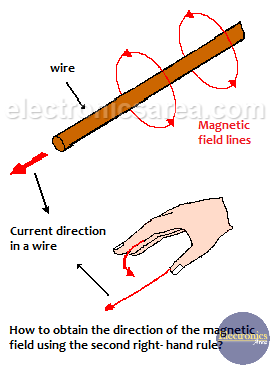 This effect is very easy to visualize in direct current. The formula to obtain the magnetic field in a long conducting wire is: B = u.I / (2.p.d), where:

This formula is valid as long as “d” is much smaller than the length of the wire.

The above formula is valid only when the radius of the turn is larger than the length of the coil. When the opposite occurs, B has the formula: B = u . n . I, where:

It is important to know that:

The best known applications, of a magnetic field created by a current in a wire, use alternating current. For example: