Microwaves: At the present time the radio frequency spectrum is becoming small for the growing demand for telecommunications. The incursion into the field of microwaves is natural and we must also take into account that there are some applications that are unique to the microwave frequencies.

During the Second World War, the word “RADAR” was the same to say microwave. At this time the development of microwave systems received a major stimulus due to the need for a high-resolution radar capable of detecting enemy aircraft and ships. 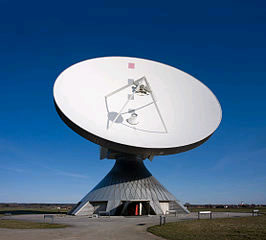 At present time the use of microwave systems is very important and their applications include air traffic control, marine navigation, control of missiles, aviation, telecommunications, among many others. In recent years, microwave frequencies are used in telecommunications a lot more each time.

The satellite communications is becoming very important in the commercial area. Many television stations broadcast to the entire world by satellite. The signal they emit can be capture in remote locations where there is no traditional television service.

The microwave frequencies include the range of 109 to 1012 Hertz, corresponding to wavelengths ranging from 30 cm. (centimeters) to 0.3 mm. (millimeters). These wavelengths have the same magnitude as the size of the circuits used for its generation.

Due to the smallness of the wavelengths, the propagation time of the electrical effects from one point to another in the circuit, is comparable with the period (T) and the oscillating charges of the system.

As a result, an analysis by Kirchoff’s current law and the Kirchoff’s voltage law and the conventional concepts of power at low voltage and frequency does not adequately describe the electrical phenomena that occurs in a microwave circuit.

Besides that an analysis of a circuit of this type should consider electric and magnetic fields associated with this device.