The Mesh current method is very useful to know all the current  in a network of only resistors. This method, a little more extended, is also applied to circuits where there are resistances and reactance.

Using the mesh current method, resistors current values are calculated, then it is easy to obtain their voltages and their consumed power.  This method is based on Kirchhoff’s voltage Law.

The Mesh-Current Method or Loop Current Method  is a technique used to find the currents circulating around a mesh with in any closed path of a circuit.

Steps to follow to make analysis by the mesh current method:

Example of Mesh Current Method in a Resistor Network 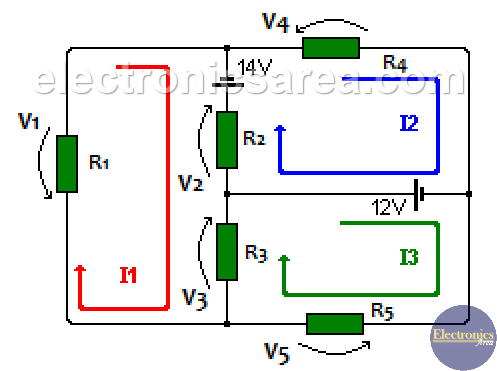 Voltages in each resistor are:

We use the following values of the resistors:

The final equations are: (as indicated in step 4

Since there are three unknowns values (I1, I2, I3), there are three rows in the table. Using the substitution method or the determinant’s method, the following values are obtained: