This Car battery monitor circuit is very simple and very interesting. How many times have you found that the car does not start because the battery is discharged? This circuit uses 3 transistors and some additional elements, to show the level of charge of the battery.

How does the Car Battery Monitor work? 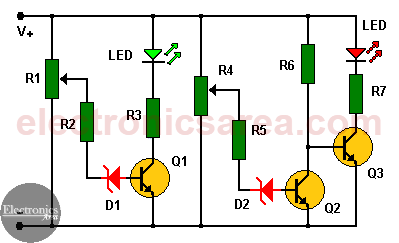 When the voltage at the variable end of the potentiometer R1 exceeds the voltage, which is the sum of the base-emitter voltage of Q1 + the voltage of the zener diode (D1) + the voltage drop in R2, the transistor Q1 becomes saturated and a current passes through resistor R3 and the green LED lights up, indicating that the battery charge is OK.

The red LED turns on in the opposite case, when the voltage which is the sum of the base-emitter voltage of Q2 + the voltage of the zener diode (D2) + the voltage drop on the R5 resistor is less than the voltage in the variable end of the R4 potentiometer, indicating that the battery is with a low charge.

Transistor Q2 is used as an inverter.

Very simple. We connect the circuit to a variable voltage source (to simulate the different possible voltages at the battery terminals). Then the potentiometers (R1 and R4) are tuned so that …..

If none of the two LEDs light up, it means that the battery voltage is between the two limit voltage values seted by the potentiometers.

A car battery should never have a voltage lower than 12 volts, nor a voltage greater than about 14.4 volts. With the help of these data the circuit can be well calibrated.

List of circuit components for the Car Battery Monitor