Why it is called a Universal electric motor?

The universal electric motor is so named because it is the only motor that can be connected to both alternating current and direct current.

When the universal motor with constant load is connected to a direct current power source, the speed and power increase proportionally with the applied voltage.

When this motor with constant load is connected to an alternating current power source, speed and power increase proportionally with the applied voltage starting at 3000 r.p.m. (revolutions per minute)

In the universal motor, the speed for a given voltage in alternating current is lower than that which would be obtained if the same voltage is applied but in direct current.

The principle of operation of this electric motor is determined by the motor effect produced by a conductor through which an electric current flows and which is subjected to a magnetic field.

By magnetomotive action there will be a displacement and therefore a rotation.

Constitution of the Universal Motor

Conductive coils: They are known by the name of inductor or inductive fields.
Induced coil: It is the wound rotor and is known by the name of armature.
Brushes: They are made of carbon because it is a soft material and has a negative temperature coefficient.
Springs: They serve to keep the brushes in place by means of mechanical pressure.
Covers or shields: They serve to support the motor shaft and give the mechanical structure to the motor. 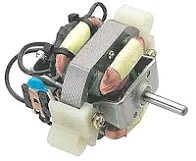 Works with alternating current and direct current
It has a very high starting torque
Speed ​​is directly proportional to current
Used in hand tools, household appliances
To reverse the direction of rotation, the direction of the current is reversed in any of the windings.

The universal electric motor bases its operation on Laplace’s law. The inductor winding and the induced winding are connected in series.

Since the two windings have the same current flow, the inductor winding forms the magnetic field. The winding induced by Laplace’s law, being traversed by the current and subjected to the influence of the inducing magnetic field, moves, giving rise to the rotation of the rotor.

If you increase the field, the force increases and so does the speed.

The magnetic field produced by the induced coil causes a deformation of the inductor flux called the armature reaction.

In alternating current (AC) or in direct current (DC) the sense is maintained by the momentary action of each particular alternation.

Speed ​​regulation on the Universal Motor

1. By Rheostat: By varying the arrow of the rheostat, the current in the motor is varied. 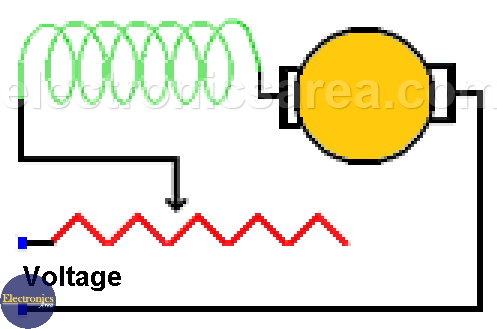 2. By switching resistors: By varying the connection (switching) between the numbered terminals, the resistance is varied and therefore the amount of current delivered to the motor. The higher the resistance, the lower the current. 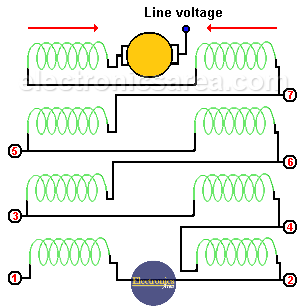