Amplifiers are circuits that are used to increase (to amplify) an input signal (usually very small), thus you can obtain an output signal with much greater amplitude than the original one. Common amplifiers are made of bipolar transistor, but there are others that use operational amplifiers (op-Amps), electronic valves, FETs, etc.

Amplification is the process to increase the magnitude of a signal, generally using an amplifier.

Sometimes the amplification can cause a distortion of the signal on the output of the amplifier since there is a very large amplification. We must take into account that an amplifier can not have on its output a higher level of voltage, than the power supply has. 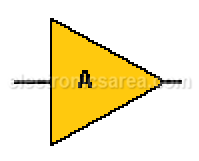 Well known to all are audio amplifiers. In these cases a very small audio signal that is obtained from a microphone or sound source such as CD or DVD is amplified.

Since the power supply voltage is not very high (in case of transistor amplifiers), the current is amplified. (see previous power formula). The audio amplifier output is applied to one or more speakers that transform the electrical signals into sound waves.