What is the Difference between Electricity and Electronics?

In an electrical circuit the current flows through the conductors and components in a natural way, having the current, a value that depends on the components connected in the circuit. 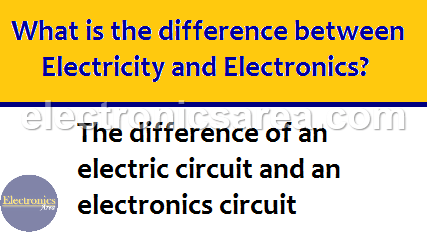 But this is not new, just put a switch to let flow or not the current through a light bulb. (In this way we would be “controlling” the flow of current through the bulb).

In an electronic circuit … electricity is able to control electricity.

Historically the electronic stage starts with the Audion tube. This device controlled the flow of an electron beam, which traveled in a vacuum, between two electrodes (metal structures within the tube between which there was a difference in voltage).

In 1948, the transistor was invented. A small device with effects very similar to those of the Audion tube, but of much smaller dimensions. The transistor controls the flow of electrons through a semiconductor material instead of in a vacuum. This type of electronics is also called Solid State Electronics.

With an electrical circuit it is not possible to send information. With an electronic circuit, information is sent from one place to another, thanks to its characteristic of being able to control the flow of the current.

For a circuit to be properly called “electronic circuit” it must contain at least one active element. If this circuit does not have active elements (it only has resistors, capacitors, inductors, transformers and even rectifier diodes, all called passive elements) it is not a genuinely “electronic” circuit.