The microwave oven was discovered in 1947  by Percy Spencer. Mr. Percy  Spencer, an engineer of the Raytheon Company, was carrying in his jacket pocket a bar of chocolate, which gave origin to one of the most used inventions in everyday life.

How the microwave oven was discovered?

Mr. Spencer conducted researches with a high frequency generator (about 60,000 MHz) to be used as a radar. 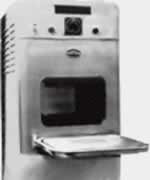 Mr. Spencer decided to verify his experience by placing an egg and some popcorn near the frequency generator and he left the place. When he returned to his lab, he founded that there was popcorn and scrambled eggs all over the place.

In 1947 a bar of melted chocolate, turned a radar into the first microwave oven.